See the lives we've touched and meet the people who we've assisted to reach their highest atainable levels of independence. 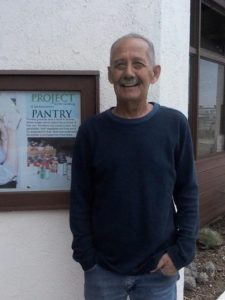 "Recognizing what synergy can do in solving Homelessness"

by Karen Helen Szatkowski
used with permission of the Ventura Breeze

Donald Hillburn volunteered for the war being waged in Vietnam. He showed up to ﬁght. The rest of his story there is piled upon the stacks of stories of other Vietnam veterans and their similar dark nightmares. He struggled with substance abuse and teetered on the edge of homelessness upon returning. But this story rises above the many possible bad outcomes of that set of facts because of his own character and self-discipline and the response of Project Understanding along with Section Eight Housing.

To understand Donaldʼs story it is important to know that he grew up in small town America here in Santa Paula. Graduating from Santa Paula High School in 1966 he entered the Army and started a one year training period, consisting mostly of combat engineering. Once completed, he spent the next year of his young life in the jungles of Southeast Asia trying to stay alive.

This is the setting of his introduction to drugs and alcohol tinged with fear that was fully acknowledged if not encouraged by the commanders and ofﬁcers in the ﬁeld. The self-medication was cheap and always available with pretty much 100% participation by his comrades as Donald remembers it.

There was no such thing as posttraumatic stress disorder in those years and no serious acceptance in the medical community for its symptoms of nightmares, loss of interest and instability, ﬂashbacks, anger and headaches. The clouds of napalm, the explosions and gunﬁre left Donald his two biggest handicaps; the nightmares and the inability to develop a rooted existence and they have never subsided. He feels compelled to change jobs and marriages and residences after just a few short years. He did establish himself here upon discharge, off and on, as a mechanic in the oil ﬁelds and with other employers.

Donaldʼs grandmother, who raised him, died in 1978 leaving him with few ties to Ventura County. He hitched a ride to Petaluma, in Northern California and settled in for decades, collecting friends and employers. By now he had accomplished a fragile control of the drugs and alcohol as he felt very connected to Petaluma and his life there.

However he still dealt with the same reluctance to commit to a job, a woman or a home. Sometime in 2010 he started having breathing problems, was diagnosed with a serious case of pneumonia and spent two weeks in the hospital. When he got out the breathing did not improve much and he was conﬁned to a portable oxygen tank.

He returned to Ventura in 2012, carrying his tank and mysteriously found that the ocean air relieved his breathing somewhat but not his joblessness and homelessness. Someone recommended Project Understanding and he credits Hank Koozehkanani and other staff there for helping him escape the streets and into a very livable duplex which he can pay for from PTSD disability beneﬁts. He does run low on food occasionally but Donaldʼs is a story of what can be fashioned by the veteran himself, the community and the government in catching a deserving veteran on the way down and providing a soft landing worthy of an American solution for our veterans. 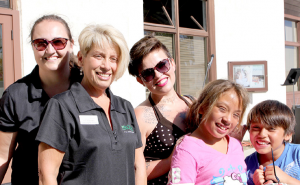 It’s hard to find your way in the dark.

Olga can tell you just how very hard it is. Twenty years ago she had no hope. She used drugs. She spiraled down for 13 years. She lost her son when he was 8 years old. She missed holidays. She missed birthdays. She missed his high school graduation. She spent time in jail.

Somewhere in between, in 2000, she experienced Project Understanding’s Pantry. And when she hit the bottom—no money, no friends, broken—she remembered Project.

Now, she’s proud to say in the bright light of day, that she’s been clean and sober for nine years. She has earned an Associate of Arts degree in Substance Abuse Counselling. She has worked very hard. Her record has been wiped clean. She’s repaying her debts to society. She’s a member of The River Community.

It hasn’t been easy, but she was determined, and Project was there to help.

“Thank you, Project, for turning the light on,” says Olga.

Olga is now Site Manager at The City Center. She volunteers at her church’s pantry and at Project Safe where she works to stop drunk drivers. Best of all, she’s been reunited with her son and two beautiful grandchildren…and her son is studying to become a pastor.

She’s in the light. And she is a light for others. Thank you, Olga, for sharing your light!

She had been around for some time. Fourteen years. She refused offers of assistance, giving the inquirer a friendly smile.

Her home was the entrance of the public library on Ventura Avenue. It was there that she sat with a cart holding her belongings. She frequented the donut shop across the street where the proprietor graciously gave her a cup of coffee and a donut.

Susan was homeless. Her refusal of help was something we at Project Understanding hear frequently. But we’ve learned to be persistent, to never stop offering.

Fariborz Koozehkanani, better known as Hank, our Homeless to Home (H2H ) program supervisor, kept an eye out for Susan as it was obvious her health was declining. One day he saw her sitting at a bus stop, obviously in need. This time Hank’s offer of help was not refused. Susan had an open sore on her leg and the infection was spreading throughout her body. She was immediately hospitalized and successfully treated.

It takes a village. Susan agreed to receive help, and in came Ventura County Homeless Services. Susan would need financial aid to end her homelessness. They found it for her.

Persistence, determination, and a village equals a hand up, not a handout. It resulted in a mother reunited with her son and one less person living on the street.

Susan, we believe in you, thank you for taking our hand. We thank God for Hank, for Ventura Homeless Services, for the entire village…

Project Understanding provides hope by developing and directing resources for the purpose of transforming lives and community through justice, mercy and compassion. Through collaboration, we assist people to reach their highest attainable level of independence. Project Understanding is founded on the ideals and principles of Judaism and Christianity.

Be one of the first.

Click here to edit Spacer module. A message from Project Understanding Welcome to 2017! We are overwhelmed with gratitude at Project…

An Ode to Volunteers Santa Claus envies me, He dreams of riding in my van. All he drives is a…

What would it feel like to help a needy family at Christmas or Hanukkah? There are so many families in need…

Stay up to date

Thanks for subscribing! Please check your email for further instructions.

Something went wrong. Please check your entries and try again.